The world community is stepping a foot ahead for women empowerment. Its latest evidence is $75 million in Series C funding provided to the coworking organization. Stalwarts like Sequoia Capital and Airbnb have come forth to support this women-centric coworking space.

The Wing has its headquarters in New York and the founders Audrey Gelmann and Lauran Kassan started it in 2016. Along with Airbnb and Sequoia Capital, other investors include Upfront Ventures, NEA and WeWork. In November 2017 the Wing with assistance from WeWork raised $37 million in Series B funding. This shows that WeWork is interested in acquiring The Wing, but it has not been confirmed yet.

The Wing has progressed rather swiftly and is already flourishing in New York, Washington DC. They also have a coworking space in San Francisco. 2019 will see 6 additional coworking spaces opening up shop in West Hollywood, Chicago, Boston, London, Toronto, and Paris.

A single peek inside the Wing spaces will give you an idea that it is indeed inspired by a feminist touch all around. Added to this there are lactation rooms, beauty rooms, showers, conference rooms, and much more all inspired by and for inspiring the women. All this comes with the membership plans operating at The Wing which starts from $215 per month.

Being a women-centric initiative all the support and activities in this trajectory are conducted by women only. Also, the majority of the staff working here is female and the spaces are also architected by women.

By the virtue of series C funding, a partner of Sequoia Capital Jess Lee and that of Upfront have been inducted into the board of directors at The Wing. Lee also hinted at the fact that this funding round will allow The Wing to go digital in their operation and community wise.

The Wing’s executive director has stated that this investment will allow them to scale new heights both in the offline and online realm. On these lines, The Wing has also launched a members-only mobile application which helps them to connect and RSVP the events. 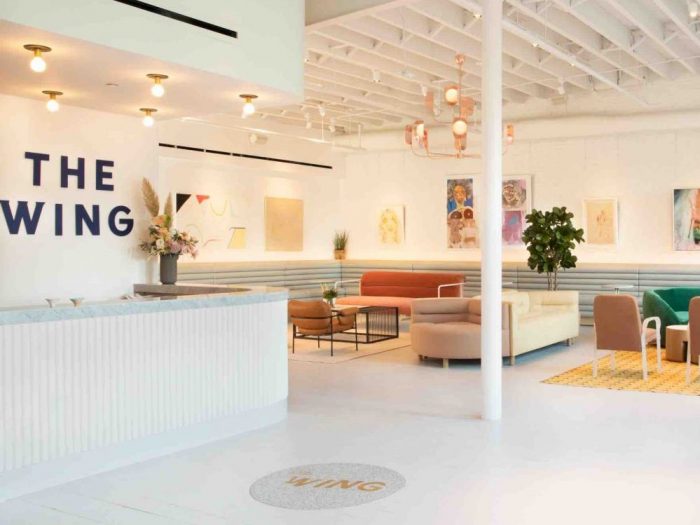 Another positive factor of this round of funding was that a lot of women stepped up to give their support financially and intellectually for this space. Personalities like Kerry Washington, Katie McGrath, Valerie Jarrett, Robby Kaplan, Hillary Rosen, Alex Morgan, Megan Rapinoe, Meghan Klingenberg, and Becky Sauerbrunn have also contributed towards this venture. Women-Only coworking spaces are on the rise due to this and Melbourne also is the proud owner of One Roof coworking space. They also aim to foster women entrepreneurship and help them raise the bar of success and create an enabling environment.

Although Airbnb’s role is not yet clear, its CEO Brian Chesky has shared his enthusiasm for the culture and propaganda of The Wing. He is thrilled to support them and is inspired by them to a great extent.

There are similar co-working spaces that have forayed into the same style of coworking, Make Lemonade Toronto and The Refinery in Texas. With The Wing levelling up in this style of coworking, we can expect a lot of other coworking initiatives taking birth at various locations in the coming years.